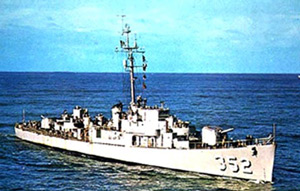 U.S.S. Naifeh, DE 352, in Honor of Lt. Alfred Naifeh
Alfred Naifeh was born in Covington, Tenn. to a Lebanese family, January 5, 1915. He graduated from the University of Oklahoma with a law degree, and was also a member of the Reserve Officers Training Corps. When World War II began, he was commissioned on July 5, 1942 and reported on board the U.S.S. Meredith as Destroyer Division Disbursing Officer, February 27, 1942. He was promoted to Lieutenant October 1, 1942. After the Meredith sank in the Battle of the Solomons, Lt. Naifeh worked for two days and nights keeping wounded and exhausted survivors on life rafts. As a result of his continuing valiant efforts to save his shipmates, he was completely overcome by exhaustion after fighting off shark attacks, which ultimately resulted in his death October 16, 1942. For his devotion to duty and courage, Lt. Naifeh was posthumously awarded the Navy and Marine Corps Medal as well as a Purple Heart. Two years later, the U.S. Navy named a ship after him.
The U.S.S. Naifeh was commissioned on July 4, 1944, and christened by Rathia Naifeh, mother of Lt. Naifeh. After commissioning, Naifeh trained and conducted a shakedown cruise off Bermuda, then had training duty out of Norfolk. Initially an Atlantic Fleet ship, its first convoy duty was from Brooklyn, NY to France and then on to Algeria. The ship departed Brooklyn October 6, 1944 on the first of two voyages escorting convoys to Europe and North Africa. Naifeh departed New York January 13, 1945 to join the Pacific Fleet in a final drive against the Japanese. The ship was decommissioned on June 27, 1946.
At the award ceremony for Lt. Naifeh’s Navy and Marine Corps Medal, the following citation was read: “For heroic conduct and outstanding devotion to duty in caring for survivors clinging to life rafts after the sinking of the U.S.S. Meredith. With complete disregard for his own personal safety, Lt. Naifeh persisted in constantly swimming around the rafts, rendering invaluable aid to the men who were wounded or exhausted.