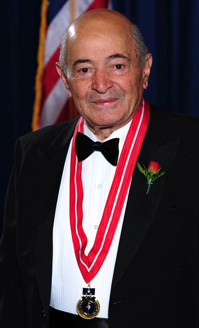 Each year since 1986, the National Ethnic Coalition of Organizations (NECO) – whose mission is to honor our diverse Past, to advocate for positive change in the Present, and to build

According to Nasser J. Kazeminy, Chairman of NECO, “NECO is about investing in the power of caring, whereas people from all cultures and walks of life stand together arm in arm to make a real difference

in our world through shared compassion and philanthropy – not just for now, but to also inspire future generations who will continue to preserve and build upon the legacy that each of our cultures has contributed.  With our Medalists, we will see America – at its best.  We will see every color, every race from so many walks of life – together – celebrating – the magic that is America.  Our Medalists’ influence and achievements truly inspire and touch the lives of people everywhere.”

Past Ellis Island Medal of Honor recipients include six Presidents of the United States, Nobel Prize winners, athletes, leaders of industry, artists and others whose work has made a lasting impact on humanity.  They are awarded annually to outstanding American citizens, from all walks of life, who have distinguished themselves through their significant contributions to this country.  The Ellis Island Medal of Honor ranks among the nation’s most prestigious awards.  The U.S. Senate and House of Representatives have officially recognized the Ellis Island Medals of Honor, and each year the recipients are listed in the Congressional Record.  To date, more than 1,800 American citizens have received Ellis Island Medals of Honor.

“I believe you can say to the founders of this great nation, 'Here I am, a youth, a young tree whose roots were plucked from the hills of Lebanon, yet I am deeply rooted here, and I would be fruitful.'”